Created by Pop Warner, the Double wing offense has been tearing defenses apart for 100 years now – that’s a lot of touchdowns.

But the father of the offense, the man who nurtured it, helped it grow into what it has become today, is Don Markham, who set the national high school scoring record, winning the national championship with a whopping 880 points in 14 games. That’s just a shade under 63 points – or nine touchdowns a game!

Much like the wing-T, you’re going to line up a center, two guards, and two tackles in this formation – and you’re going to add two tight ends, and two wingbacks as well. A perfectly symmetric formation, we bring our halfback up to play as the second wing back, with our full back lined up directly behind the quarterback. 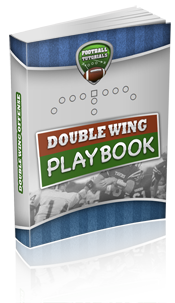 If you're interested in learning more about Double Wing Offense, make sure you check out our Double Wing Playbook. It's packed with 10 simple, fun and effective plays designed for youth and high school football. All explained with player responsibilities, step by step diagrams, and implementation tips for coaches.

Get The Double Wing PDF Playbook

Below are some sample plays you can check out.

The difference between a zone blocking scheme and a regular one is that in the zone the offensive line moves in complete cohesion in one direction, not trying to move defenders left or right, but moving in a direction together. The defense will be forced to commit to holes that open up, and a RB with good vision can pick apart the defense for huge gains.

This is a good passing play to use on any down, and any situation. The combination of short and long crossing routes are effective for deep or short passing, and against man or zone coverage. While most of the action is happening on the right, I’ve found the routes on the left are most often open, as the strong side CB is forced to cover both the LWB and FB.

For more plays like this, check our complete Double Wing Playbook today!